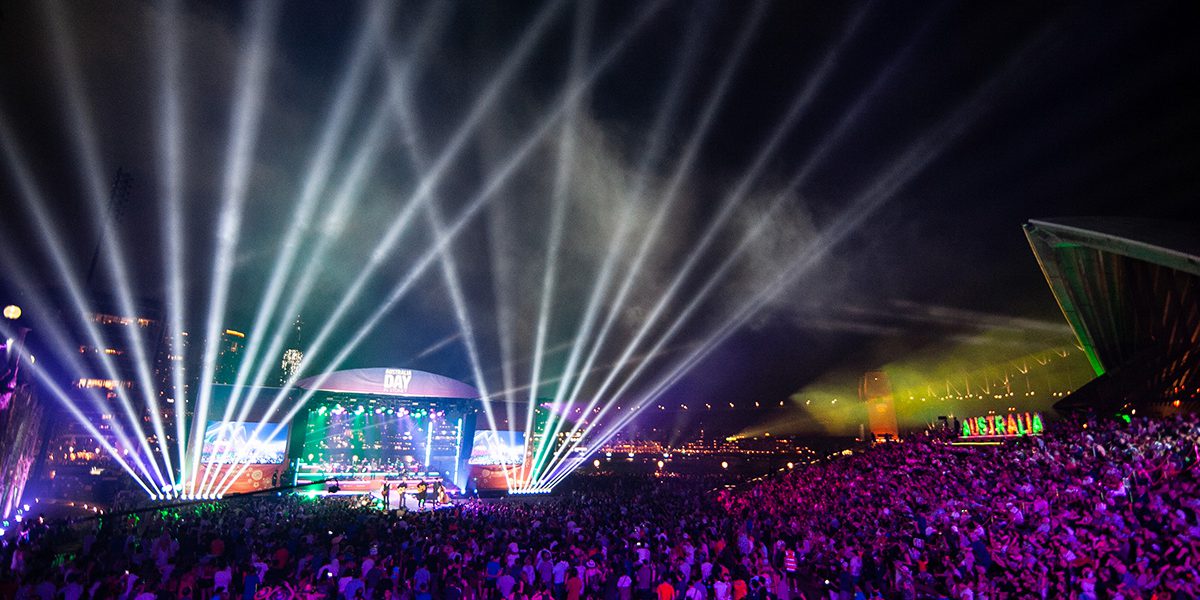 On Australia Day 2020, Sydney came alive with non-stop entertainment on the water, in the sky, and around the foreshore. Australia Day Live attracted 65,000 people to Circular Quay where the day culminated in the annual live-to-air concert held at the Sydney Opera House (SOH) Forecourt.

The concert was synchronised with jet skis, flyboards, and a stunning fireworks display to cap off a sensational day of celebration.

Lighting for the concert stage at the SOH was designed by Stuart Anderson with the main onstage lighting delivered by 24 x Martin MAC Viper Profiles and 26 x MAC Quantum Washes stashed away in Design Quintessence’s pre-rigged truss.

“We wanted to get the whole rig as tight to the roof as possible so there was plenty of space to see through to the view behind the stage,” explained Stuart.

Experienced in many Australian outdoor events, Stuart knew that a large amount of his rig would have to be weatherproof – just as well seeing as they were hit by both rain and a dust storm!
“The front truss rig held nine Ayrton Perseo plus six Prolights Panorama IP WBX washes as they were out in the weather, as well as six ShowPRO Colliders,” commented Stuart.

“I was initially concerned with matching the Perseos and the two Robert Juliat Aramis 2.5Kw HMI followspots,” added Stuart. “But instead of trying to get the followspots to match the Perseos, we did it the other way round and it worked really well.”
Again, the front of house towers also had six Panorama Washes as well as eight ShowPRO Colliders to colour wash the audience.

To add a bit of sizzle to the stage, Stuart used 50 x ShowPRO Dreampix IP-rated Strips – 1000Mm ontop of the band fascias around the stage. Eighteen ShowPRO Quad LED IP Strips were used on the vertical roof legs with another twelve behind the choir that were on the steps of the Opera House.

The hosting positions were lit by four of the new Prolights Eclipse panels TWC which delivered a great punch.

Control was two MA Lighting MA2 Full Size consoles out front and one MA2 Light console as the stage and back-up console. Added to that were four MA NPU and four MA NSP.

“It’s a hard show because when we do the camera rehearsal the night before, it’s the first time we’ve seen any of the acts on camera,” revealed Stuart. “We only see about 20% of what actually happens on the quay so it is pretty much a case of we sit it when it goes to air. We have to try to keep ahead of ourselves because it can all change so quickly.”

Meanwhile, on the other side of Circular Quay, Live at the Quay was underway with Paul Collison at the helm. Whilst it is a show for the live audience in the quay it also provides a background for the Opera House Forecourt show. Even though both shows are inextricably linked, at their core, they serve two different audiences.

The LATQ design is centred around the action on the water. The 36 x Panorama Beam lights are strategically placed around the quay for backgrounds of the Forecourt show, but also to provide some aerial enhancement for the thousands who watch the show.

A row of 24 x Claypaky Unicos provided another set of aerial beams that could also provide a wash of light across the quay for some of the live-action. A total of 36 x Collider FC Strobes were on a central barge to add some sparkle to the quay.

The other significant part of the LATQ show is utilising the strings of ShowPRO LED Dreamfest on the watercraft. Triggered via SMPTE, each craft has a bespoke set of programming that allows the individual watercraft to become a part of the overall show. The yachts also featured 20 x ShowPRO EX36 LED food lights.

Control was via an MA Lighting grandMA3 Compact XT with a W-DMX wireless network across the entire quay.